1937 brought the greatest flood New Albany and the Ohio Valley has ever witnessed – but not the first. The river was the cause of New Albany’s growth – and the river also caused tragedy and destruction . . . the 1937 flood was the climax of a long series of inundations which started when New Albany was less than a dozen years old and continued every few years to plague the city, flooding low-lying areas, forcing riverfront industries to suspend operations, causing thousands of dollars worth of damage to homes and business, and oftentimes claiming lives.

One of the earliest instances of extensive flood damage was in 1832 when the Hughes-Palmer Mill in Clarksville, near the site of the present Pennsylvania Railroad Bridge, was demolished by the raging waters. And in 1847 the old wooden covered bridge which carried Main Street over Falling Run Creek was floated from its moorings and wrecked by flood water.

Unusually severe floods occurred again in 1858 and 1883. Then came the flood of 1884 which for 39 years held the record as the highest ever – until the 1913 flood with its trail of death and destruction seemed to set a mark that would stand as an all-time high. A stone set into the wall of the Pennsylvania Railroad freight station at the foot of State Street records the depth of the 1913 flood. But then came 1937 and all previous marks were literally buried in the mud. 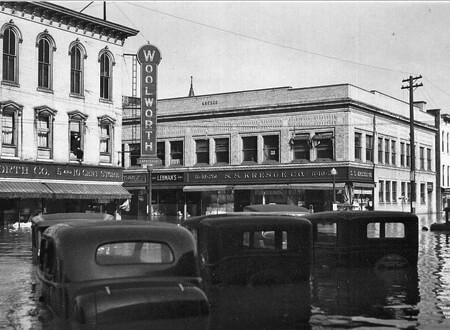 As the rain fell day after day that January 20 years ago, the river crept higher and higher, and though it lapped over the New Albany wharf and the well-named Water Street, the city was not alarmed. High water came almost every year and was taken for granted. But the rain continued and the river rose higher and higher, creeping closer to Main Street, backing up through sewers and flooding low areas, forcing many families to flee. And still the water continued its relentless advance, spilling over downtown Main Street for the first time in the city’s history. All business was suspended as the silent enemy flooded downtown stores, and residents whose homes were in the path of muddy water sought shelter with friends, then were forced to flee again as the water threatened their new-found haven.

Hundreds of New Albany residents were forced to seek safety in other communities – Salem, Corydon, Seymour, Mitchell, Columbus and countless other towns which opened their doors and their purses to aid the homeless. In New Albany itself the high school, the Armory and old St. Mary’s School at Elm and East Eighth were turned into emergency care centers and housed medical teams inoculating scores against the dread typhoid fever. 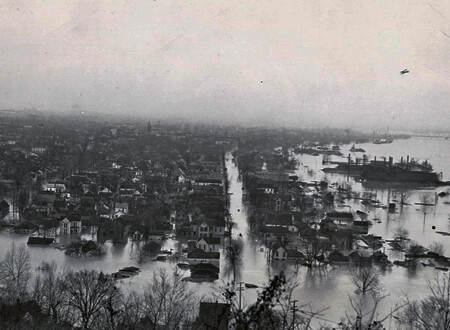 Electric power was cut off in most areas and National Guardsmen patrolled the city to prevent looting of abandoned stores and homes. The New Albany Fire Department mounted a pumper truck on an improvised raft of oil drums so it could be floated to the scene of any fire. On January 27, when the water crested at some 30 feet above flood stage, the water at Spring and Silver just touched the bottom of the traffic signal there.

As terrible as the flood itself was, an even grimmer time lay ahead as the water began receding in the early days of February, leaving all it had touched coated with inches-deep slimy muck. The heartbreaking return to wrecked homes and businesses meant the beginning of the almost impossible task of cleaning up the debris of destroyed furniture, river mud and flotsam left behind by the retreating water.

But the task was accomplished and in a few months practically all traces of the devastation had vanished.

Today New Albany rests securely behind its floodwall – a project designed to prevent any future flood from spreading the death and destruction which floods always brought in past years. The wharf and historic Water Street have vanished beneath this great earthen dike, but New Albany remains a river town – safe from the river.